“You found your voice again,” an old friend said to me a few weeks ago. Where was it? In witness protection? Hiding out in a dim-lit basement in some nondescript suburb? It might seem like an odd comment, but it made complete sense. He was right.

In reality, this abstract, intangible concept that has riddled writers since the beginning of free expression was never lost. Instead, it was on hiatus while I tackled a new challenge – From Tragedy to Triumph. The difficulty in this project was that I was tasked with writing as if I were John Tartaglio. Having to think like him, sound like him, and, on some levels, live like him reminded me that I had a writer’s voice and it was not the same as his.

However, the process of realizing this was one of infinite edits and innumerable cuts as my own writer’s voice tried to speak up over someone else’s voice. I had to suppress it and, in the process, wrangle with my own ambitions in the context of the project. I felt like Garth Brooks when he attempted to transform into Chris Gaines, a move that signaled the death knell of his career. Was I ending my career before it even began? No; instead I learned more about my voice writing in someone else’s than I did in the years I spent trying sound like someone. This speaks to the organic nature of the writer’s voice.

END_OF_DOCUMENT_TOKEN_TO_BE_REPLACED

The following is Part II of an interview that I did with Featured Artist Kyle Horrocks. He has gone from a somewhat dubious graffiti artist on Long Island whose true talent was only known to those he could trust to a ‘visionary’ talent in California who has begun to gain a following. This is his story.  To read Part I, click here.

AFC: How would you characterize your style?

KH: If one word could sum it all up it would be “visionary.” It’s the ability to not only see but to see different from what everyone else sees. Another word could be “organic”; my latest works use sacred geometry, golden proportions, and the Fibonacci sequence that resonate with the human mind. People view my pieces and like it for reasons they’re unsure of, but its a lack of knowledge of simple shape and colors combined to create something ascetically pleasing, every time. I have a very particular fan base; almost always they are people who are more connected to nature than most.

AFC: What have been your favorite pieces and why?

KH: I’ve always loved my illustrations of organic things like animals or people because I only use black and white yet still find a way to portray so much emotion by using high contrast reference images [to] give a more dramatic look to the illustrations. END_OF_DOCUMENT_TOKEN_TO_BE_REPLACED

The following is the first part of an interview I recently did with Featured Artist Kyle Horrocks. He has gone from a somewhat dubious graffiti artist on Long Island whose true talent was only known to those he could trust to a ‘visionary’ talent in California who has begun to gain a following. This is his story.

ANDREW F. CHAPIN. When was the first time you realized you had a talent?  What were you doing?

KYLE HORROCKS. Sitting around a fire one night in the woods discussing (or should I say arguing) theories of the mysteries surrounding Oak Island and the said treasure it holds, a very good friend of mine whom I considered and still do to be extremely intelligent said that I was the smartest person he knew ‘cause I know a little about everything. It’s been a boost of confidence that’s pushed me to not only want to learn more but to never stop learning about myself, others, past, present, and where the future could take us as a whole. 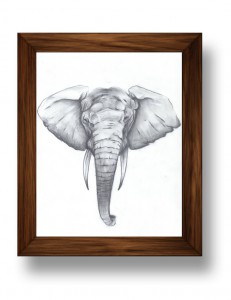 AFC. Whom did you dream of becoming as a kid?  How has that translated into the present day?

KH. I always told my mom I wanted to be a Ninja Turtle when I grew up; I don’t have the kung fu moves or a shell just yet, but what I do have is many talents. Each Ninja Turtle was named after a Renaissance man and a renaissance man is someone of many skills. I think it was Einstein who said to be a man of value not success.

AFC. When did you first realize you wanted to pursue art as an occupation?

KH. I’m not sure if it was a want or a need. After high school, I went straight into the work force doing whatever I could, and the money was great but the toll it was taking on my body was another story. I loved being outdoors and doing something physical but seeing the older guys on the crew with back and shoulder problems made me look towards my future as a surfer. Then, the realization hit me that I can’t do this forever and its time to maybe try the whole college thing. I thought of what I knew best other than manual labor and that was graffiti, everything fell into place from there.

END_OF_DOCUMENT_TOKEN_TO_BE_REPLACED

Knowing When You’re Too Young To Grow Up is the coming-of-age story of a teenage protagonist who unknowingly sets out on a journey towards self-discovery when he travels abroad with his high school. This trip will indelibly change his life as he is confronted with situations that force him to question his worldview and reevaluate himself, his friends, and his overall conception of humanity.

The following is an excerpt from my fiction novel that I am currently editing:

I loved her, but she was about as faithful as a prostitute.  My mother was a medical malpractice defense attorney who absolutely slept with her slick office manager “Joe.”  He had a very musky, masculine smell which must have given my mother the audacity to invite him to spend the night a couple times when she was drunk.

END_OF_DOCUMENT_TOKEN_TO_BE_REPLACED

From Tragedy to Triumph on Fox News’s Hannity

In case you missed it, my co-author John Tartaglio was the first guest on Sean Hannity’s “Great Americans” series on Fox News.  On it, he spoke of his life, overcoming a devastating bacterial infection that took his legs to becoming a New York City Marathon competitor, husband, and father.  These experiences are the premise behind From Tragedy to Triumph, which is discussed near the end of the segment.

If you haven’t seen it, check it out ASAP!

MILFORD, Conn. (April 8, 2014) – Professional motivational speaker and co-author of the recently released From Tragedy to Triumph will close out Fox News’s Hannity tonight.

Fresh off of his January 10 appearance on “Where Are They Now?” on the OWN, Tartaglio will be the inaugural feature on Sean Hannity’s new “Great Americans” series that airs tonight at 10 p.m. ET.  The segment will focus not only on Tartaglio’s book that he co-authored with Andrew Chapin but also his family life with his wife Genevieve and his infant daughter Lily.

From Tragedy to Triumph, written by Tartaglio and Andrew Chapin, is the uplifting story of a young adult who refused to quit as he tackled a seemingly insurmountable bacterial infection that left him amputated up to his hipbones. Told he would never walk again, Tartaglio did what leading health professionals and prosthetic specialists alike said could never be done. In confronting the gravest of circumstances, John triumphed over not only the New York City Marathon but his disability as well, showing the world that “How far you fall does not determine who you are; it’s how hard you work to get back up.”

Tartaglio, a 2009 graduate of Fairfield University, will be an MBA graduate from the University of Connecticut in May 2014. His mission is to inspire people to pursue what they value and, in doing so, allow them to see that they can achieve anything they want.

His co-author Andrew Chapin, a middle school English teacher in New Rochelle, NY, majored in English and graduated from Fairfield University in 2009, recently completed his MSEd in adolescent English education at Iona College. His next project will be his coming-of-age fiction novel Knowing When You’re Too Young to Grow Up.

Published on December 30, 2013, FROM TRAGEDY TO TRIUMPH is currently available in paperback, Kindle, and all other major e-book formats. For more information, visit amazon.com or query the contact listed below. 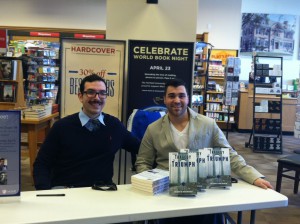 END_OF_DOCUMENT_TOKEN_TO_BE_REPLACED

FAIRFIELD, Conn. (March 26, 2014) – In 24 hours, a rare bacterial infection turned healthy 17-year-old John Tartaglio, a 2009 Fairfield University graduate from Milford, Conn., to a double-leg amputee. On Sunday, April 6, from 1 to 4 p.m., Tartaglio and his co-author Andrew Chapin will discuss the life-changing experience and sign copies of their new book, “From Tragedy to Triumph,” at Fairfield University Bookstore, 1499 Post Road, Fairfield. The event is free and open to the public.

“From Tragedy to Triumph” is the uplifting story of a young adult who refused to quit as he tackled a seemingly insurmountable bacterial infection. Told he would never walk again, Tartaglio did what leading health professionals and prosthetic specialists alike said could never be done.

He would go on to compete in 5K and 10K running competitions, as well as triathlons and even a 70.3-mile half ironman, becoming the first bilateral hip disarticulate ever to complete these events. These prepared him for his greatest challenge outside of survival – the New York City Marathon, which he ran just five years after being told he would never walk again.

As he crossed the finish line of the New York City Marathon, he realized the ultimate culmination of determination. In facing the unknown illness that took his limbs, Tartaglio transcended his disability, showing the world that, in his words, “how far you fall does not determine who you are; it’s how hard you work to get back up.”

Tartaglio, a professional motivational speaker, was recently featured on “Where Are They Now?” on the Oprah Winfrey Network (OWN). He will also be the inaugural guest on Sean Hannity’s new “Great Americans” segment on Fox News’s Hannity, which is due out soon.

Tartaglio’s mission is to inspire people to pursue what they value and, in doing so, allow them to see that they can achieve anything they want. He is expected to receive his MBA from the University of Connecticut in 2014. When he is not studying or traveling to tell his story, he enjoys spending time with his wife and daughter and other family and friends.

His co-author, Andrew Chapin, is a middle school English teacher in New Rochelle, N.Y., got his break in 2010 when Tartaglio offered him the chance to develop what eventually became their book. Chapin, who majored in English and also graduated from Fairfield University in 2009, recently completed his M.S.Ed. in adolescent English education at Iona College. His next project will be his coming-of-age fiction novel “Knowing When You’re Too Young to Grow Up.”

Published on December 30, 2013, “From Tragedy to Triumph” is available in paperback and Kindle on amazon.com. It is also available on Nook, Kobo, and other major e-book formats.

The sun is beginning to wash over the East River and onto the horizon.  Birds are rustling in hidden nests, and, for a moment, the streets are silent.  Not accosted by the obtrusive city sirens and the raucous rumbles of public buses, I savor this moment (For I know it will only last a moment).  This is my slice of the suburbs as I stand outside of my Upper East Side apartment at 7:30 AM on a Saturday morning.

END_OF_DOCUMENT_TOKEN_TO_BE_REPLACED

Thornton-Donovan School’s own middle school English teacher Andrew Chapin has recently gotten himself into a golden part of his life. In the course of two months, he has published his first book and asked his long-time to marry him (she said yes). As one of the most respected and genuine educators here, he is a role model to all the students. I chose to interview Chapin about his new success and the details of his book From Tragedy to Triumph: The Story of John Tartaglio.