If your time to you
Is worth savin’
Then you better start swimmin’
Or you’ll sink like a stone
For the times they are a-changin’
– Bob Dylan, ‘The Times They Are A-Changin’

The holidays were always consistently the same:

Christmas Eve at my grandparents’ house; Christmas Day at my parents’. One was the Italian version; the other was the American version where my father made some enormous roast.

I vividly remember Christmas Eve from the scents to the images to the sounds:

Basketball on the television

My grandmother telling him to keep quiet

I’d do my usual routine of trying and failing to convince my grandfather that there were still white athletes in sports (he was from a different generation, so mind him for he was the most accepting, understanding, and generous Depression-era man I’ve ever known),  playfully bantering about how overpaid athletes were, hearing some adages from when they were “ball players,” and then overeating before dinner and falling asleep on the couch.

My aunt, mother, and grandmother were in the kitchen slaving away to make our annual feast. I would swing through and grab a couple of breaded shrimp and my grandmother in those same polyester aprons that always smelled fresh-out-of-the-wash would kiss me on the cheek. Into her 70s, she stood on her feet for hours, checking on the fish, making the pasta, sweating herself out just so we could have the same Christmas experience we always had. And no matter how old I grew, I was felt like the chubby, corduroy and Christmas sweater- wearing adolescent I did whenever it was Christmas Eve.

In the later years when grandma no longer had the stamina and unbeknownst to me was in failing health, she sat in a chair and told my mother and her sister what to do. Then, she passed away. And the holiday changed forever.

We had Christmas Eve and Christmas Day at our house for the first time in my life. The food was the same. The people at the table were the same (minus grandma). But it wasn’t the same. And it never could be. That was my grandfather’s last Christmas with us.

Now, a couple years have passed, and since then I married the love of my life and hosted my own Christmas Eve dinner, albeit for three people. Still, though, as I’m dripping sweat and washing dishes and burning the broccoli and overcooking the shrimp and making too much pasta for the amount of sauce I made, I felt nostalgic. It conjured up all the feelings I’ve missed from my time with my grandparents. It reminded me of our family, and how much has changed over the years. And, putting the dinner on the table Christmas Eve night, feeling completely exhausted, I finally understood how hard it was to do what my grandmother, my aunt, and my mother did every single Christmas Eve.

That was then when I would be counting down the time until everyone was ready and we could go and do presents with my grandparents. No more. This year, I was at Macy’s at 7:30 a.m. getting gifts for my wife because I somehow must’ve forgotten to do that. Then, we, along with my brother-in-law and father-in-law went to the nursing home to see their Nanny. We had sandwiches from one of our favorite Italian delis. We brought her presents and listened to her gripe about the cursing invalid down the hall and we all laughed when she said something to effect of “I’m scared of him; he says mother f-er” and I felt a part of their family. 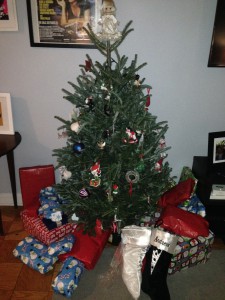 Then, my wife and I wrapped all of our presents and I started on dinner. What a feast, I’m still working off those leftovers (as in I’m still eating them, not exercising). And I can just hear my grandfather in my head telling me his patented line of “You must be joking me” if he ever knew we went to see a movie on Christmas Eve (Star Wars, and it was gooooood).

For Christmas, we saw her aunt, uncle, and cousins for a late lunch and then had dinner with my family. There weren’t enough I could’ve slept to feel satiated. It was like the game show version of the Christmas season, running here to get this and there to see them, and time!

But, as I think back on how the holidays were and how they now are, I have so much more appreciation for what I used to have and what I presently do. Change is inevitable, sure, but family will always be there when everyone else is gone. Even fake family has their moments.

To read last year’s Christmas blog, follow the link: ‘And So This is Christmas and With It The Lessons Learned Through the Years’