As we prepare for our first Christmas in our new home, I thought it appropriate to set it up with a Throwback Thursday. Originally posted on December 29, 2017, The Last Christmas in Manhattan recounts all of the emotions conjured this time last year. With reality setting in that we were going to move after our lease expired, my wife and I became sappy and nostalgic. We were coming to grips with how many memories we had made at 1737 York Ave. even though that particular unit wasn’t her first choice (and was really only mine because I’m economical).

Anyway, I don’t want to spoil it. Merry Christmas and Happy Holidays to all!

Manhattan bustles in the holiday season with its mesmerizing storefronts and bright displays and deals that really aren’t deals at all, with its teeming streams of shoppers and sightseers, with its luminescent lights down Park Avenue that shine in the night.

I thought maybe we would get a little pristine snow and gander it before the machines taint it in grime. But, alas, that wasn’t the case. Just the sub-20 degree temperatures as my father-in-law sends me pics of the pool he’s next to in Florida.

This year, as my wife and I were about to set up our Christmas tree and decorate for the holiday that seems to come upon us quicker and quicker each year, we had a realization. This will be our last Christmas in Manhattan for the foreseeable future. 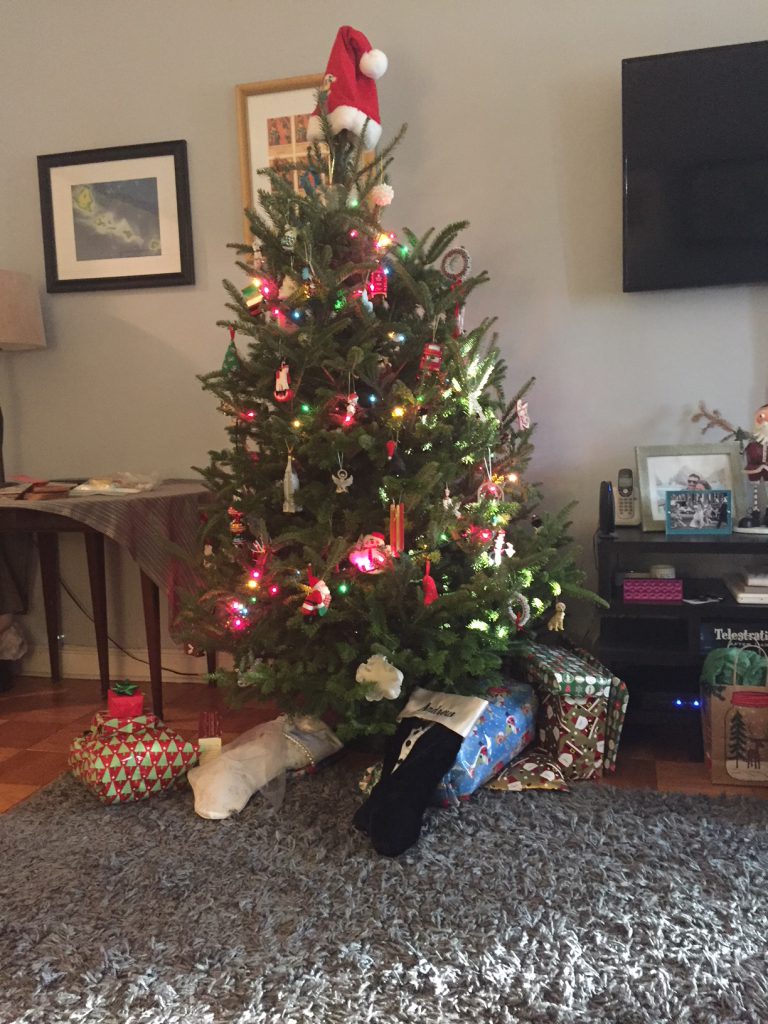 But, why would we leave the only place my wife has ever called home, a place where our closest friends and my wife’s family reside? Because most have to leave eventually, unless of course they want to rent their whole lives away or they have indispensable cash or are willing to buy and bet that Manhattan real estate value will continue to go up even if it appears it can’t go any higher. I think that’s called a bubble.

So, as I tangled myself in lights and got sap on my hands and cursed the whole process after the internet went out and we couldn’t put on Christmas music, we fondly recalled the memories we had for many of our ornaments and silently acknowledged all the memories we had in our modest one bedroom apartment in a city I was reluctant to go to all along if you read “Little Chapin, Big City.”

This was the first place we looked at nearly three years ago, and I remember my wife’s initial tepid reaction. Something to the effect of, “It’s…okay,” like it was a bland chili that really tasted like sawdust. Apartment 3E was an older unit with bookshelves built into the wall and uneven molding and exposed, hissing radiators. The living room could best be characterized as oblong as an old railway car. Meanwhile, the bedroom was spacious and the bathtub had a ledge to sit down on, which seemed like a pretty nifty and useful amenity at first, but in hindsight doesn’t matter much. And the kitchen was, well, a Manhattan kitchen. And the building had an elevator even though it didn’t have a doorman and looked like a walk-up!

The other bigger and newer buildings in the Glennwood stable of properties we looked at had stainless steel appliances in kitchens of the same size. They all had less total square footage and bedrooms that barely had enough room for queen beds. But they had doormen. And they even would reserve a parking spot for us in their exclusive garages for the same price I could get at any other garage in my neighborhood. Thanks for the courtesy!

Eventually, my wife came around to what I knew all along – the price was right for the Upper East Side of Manhattan. And the neighborhood was a good one. And the view – Asphalt Green – with its little league games and youth soccer matches and even adult rugby constantly had the sounds of childhood and competition right outside of our window.

Sure, the kitchen glowed like a convent with its white everything –  appliances, cabinets and floors, oh my!  And, yes, again the building wasn’t new in any way, so when you walked in you might confuse the lobby – if you can call it that – for the 1970s. How could I forget that the rumbling bus stops regularly below our third floor window. And the reconstituted waste transfer station too, the one across the street that I watched retirees get arrested protesting against a couple summers ago does increase the trash and the congestion as those concerned citizens claimed it would. And, finally, the honking has never been worse with the back up from the FDR.

Yet, we ended up embracing this community on York Avenue, fraternizing with neighbors, walking to C-Town to get groceries, getting our laundry done at Gracie Mansion Dry Cleaners, hustling to First on 1st for lotto and cigarettes, and of course promising to join Asphalt Green but never doing it.

And as much as I railed against living here and despite my crusade to stop paying rent, I’d be remiss in saying I’m not sad. This old and ordinary apartment whose rent is great for what it is and where it’s located – I still hate prefacing it like that – the same unit with the cracked wood floors, Formica counters, and the old gossips milling around the halls looking for company, has become our home.

And we’re going to miss it.